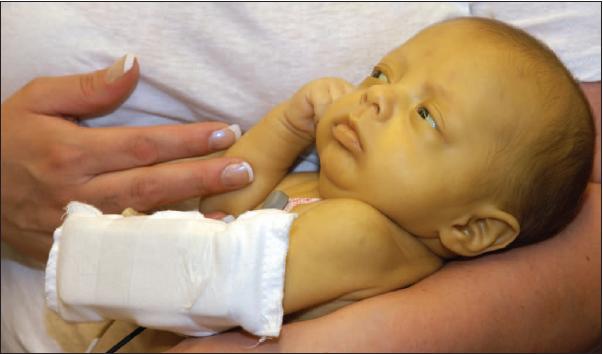 Biliary Atresia (B.A) is a rare condition in newborn babies in which common bile duct between the liver and the small intestine is blocked or missing. Symptoms of B.A typically appear within first week to two months of life, these may include:

–Jaundice: A yellow appearance of skin and whites of the eyes can be present in many newborn babies. The jaundice is due to the built up of excess bilirubin throughout the body as the liver isn’t able to clear it properly.
–Urine: Appears very dark yellow or brown, this is due to the increased bilirubin in the bloodstream, which then passes to the kidneys.
–Stools: Appear pale or clay colored. This happens because there is little or no bile reaching the intestine to color the bowel movements.
–Enlarged Liver: Feels larger and harder than normal.
–Poor Weight Gain: Babies with B.A often do not gain weight. Bile is required to digest and absorb most types of fat.

For the first three weeks of birth, I’ve brought my baby several time to the Polyclinic to check his bilirubin levels for jaundice. It was always on a slight high side. As he is breastfeeding well and so I am REASSURED by the doctor that it is likely to be due to ‘breast milk jaundice’ which could lasted up to four weeks or even months.

On the day when my baby supposed to get his 2[SUP]need[/SUP] dose of Hepatitis B vaccination at the Polyclinic, another blood test been carried out, still the bilirubin level was not much different as compared to the last test which was done one week ago. Therefore, he was not allowed to be given the vaccination which concerned me. I requested for a reference letter to Kandang Kerbau Hospital A&E and instructions given by the doctor there was that he needs to be admitted and more tests need to be carried out.

I was crushed when the doctor told us that my baby might have B.A. As several other liver diseases can give the same symptoms seen in B.A, a series of tests which include various bloods tests, urine tests, ultrasound scan of the liver, tests to look at flow of bile through liver and tests to look directly at the liver tissue were carried out. And it was confirmed that my baby is diagnosed with B.A.

We were told that the cause of the condition is unknown, and the only effective treatments are either one type of operation known as the Kasai Procedure, or liver transplantation. The Kasai procedure can be done to re-establish bile flow from the liver to the intestine in which involves connecting the liver directly to the small intestine with a loop of the small intestine. This bypasses the blocked ducts, letting bile flow from the small bile ducts inside the liver straight to the intestine and an early operation (< 60 postnatal days) can improve the outcome of B.A. After surgery, 25% of the babies will have good bile flow while 50% will have some bile flow and the remaining will have little or no bile flow which require liver transplantation. If nothing is done, the baby life span will be less then a year and I broke down uncontrollably after hearing this.

My baby was only five weeks old when he went through such a major operation. Six hours in the waiting area of the operation theater was so torturous for us. Hence, when the surgeon told us that the operation went well, it was such a relieve. Two days in ICU with no complications, three days in High Dependency Ward without life support machine and two days in normal ward he’s back to his usual self.

From the day my baby went for the operation till now, he was admitted twice due to high fever, and was treated with IV antibiotics for Cholangitis: an inflammation of the bile ducts caused by bacteria moving from the bowel. Was told that it’s a common problem after the Kasai procedure because bacteria are present in the loop of the intestine used to drain the bile. And now, his jaundice is getting so much better and he’s gaining weight too.