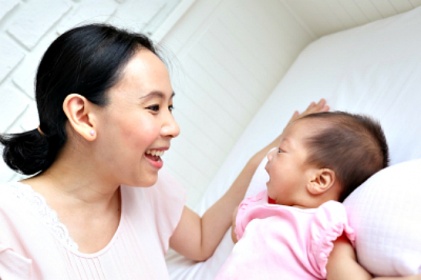 Babies learn language best by interacting with people rather than passively through a video or audio recording. But it’s been unclear what aspects of social interactions make them so important for learning.

New findings by researchers at the Institute for Learning & Brain Sciences (I-LABS) at the University of Washington demonstrate for the first time that an early social behavior called gaze shifting is linked to infants’ ability to learn new language sounds.

Babies about 10 months old who engaged in more gaze shifting during sessions with a foreign language tutor showed a boost in a brain response that indicates language learning, according to the study, which is published in the current issue of Developmental Neuropsychology.

“Our study provides evidence that infants’ social skills play a role in cracking the code of the new language,” said co-author Patricia Kuhl, co-director of I-LABS.

“We found that the degree to which infants visually tracked the tutors and the toys they held was linked to brain measures of infant learning, showing that social behaviors give helpful information to babies in a complex natural language learning situation,” Kuhl said.

Gaze shifting, when a baby makes eye contact and then looks at the same object that the other person is looking at, is one of the earliest social skills that babies show.

“These moments of shared visual attention develop as babies interact with their parents, and they change the baby’s brain,” said co-author Rechele Brooks, research assistant professor at I-LABS.

In an earlier report, Brooks and others showed that infant gaze shifting serves as a building block for more sophisticated language and social skills as measured in preschool children.

“Since gaze shifting is linked to a larger vocabulary in preschoolers, we suspected that eye gaze might be important earlier when babies are first learning the sounds of a new language, and we wanted to use brain measures to test this,” Brooks said.

In the experiment, 9.5-month-old babies from English-speaking households attended foreign language tutoring sessions. Over four weeks, the 17 infants interacted with a tutor during 12 25-minute sessions. The tutors read books and talked and played with toys while speaking in Spanish.

At the beginning and end of the four-week period, researchers counted how often the infants shifted their eye gaze between the tutor and the toys the tutor showed the baby.

After the tutoring sessions ended, the researchers brought the babies back to the lab to see how much Spanish the babies had learned. This was measured by their brain responses to English and Spanish sounds. The babies listened to a series of language sounds while wearing an electroencephalography (EEG) cap to measure their brain activity.

The results showed that the more gaze shifting the babies participated in during their tutoring sessions, the greater their brain responses were to the Spanish language sounds.

“Our findings show that young babies’ social engagement contributes to their own language learning — they’re not just passive listeners of language,” Brooks said. “They’re paying attention, and showing parents they’re ready to learn when they’re looking back and forth. That’s when the most learning happens.”

The study builds on earlier work by Kuhl’s team, which found that babies from English-speaking households could learn Mandarin from live tutors, but not from video or audio recordings of Mandarin and from other work at I-LABS establishing the importance of infant eye gaze for language learning.

“Babies learn best from people,” Brooks said. “During playtime your child is learning so much from you. Spending time with your child matters. Keeping them engaged — that’s what helps them learn language.”

The above post is reprinted from materials provided by University of Washington. Note: Materials may be edited for content and length.