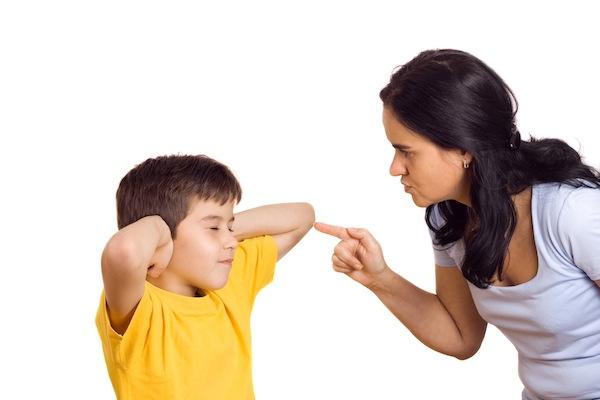 It’s a tough battle to continuously discipline a child and what we think we’re doing right can ultimately backfire. What’s worse – as parents, you tend to feel guilty and ashamed when nothing you do seems to work on correcting your kid’s bad behavior. Thus, we present 8 common mistakes that parents often make while disciplining their children, and the appropriate solution to rectify them.

#1. Scare Tactics
It’s incredibly tempting to fib to your child and employ scare tactics when all other options dont’t work. Some parents go to the extent of threatening their child with a figure they’re most afraid of and seem pleased when their frantic kid quickly finishes their vegetables or dont their pajamas for bed. As effective as it sounds, this isn’t the way to discipline your child. Empathizing with your kid is a much better method.

#2. Blank Threats
Dishing out blank threats without acting on it is ineffective. It might pain you to be the bad guy, but sometimes children need to be corrected immediately. If you tell your kid to pick up her toys and threaten to put her in time-out if she doesn’t comply, then do so. This way you get the message across that there are consequences to every bad behavior.

#3. Pushover Dad
Children tend to approach dad when mom is on the rampage. Of course, dad then reacts by doing the exact opposite of what mom’s being trying to enforce, which unintentionally undermines her disciplinary efforts. The best option would be to have both parents united on the disciplinary front so neither one seems like a pushover.

#4. Bribery
It would seem easy to bribe a child into gobbling down their greens by offering a sweet after meals. But once you start, you’ll find your child becoming more demanding over time, and failure to deliver your regular bribes can result in a massive temper tantrum. The best way to combat this would be to offer a compliment for good behavior instead.

#5. Follow Your Own Rules
Kids are fantastic mimickers. If you tap your child’s hand each time he misbehaves, there’s a high possibility he will emulate your behavior and bat someone else’s hand away. The best way when laying down rules would be to follow them obediently, thus providing a positive example for your child to copy.

#6. Losing Your Temper
Every parent finds themselves trapped in a frustrated position when their child goes berserk. Rather than yelling at your kid to stop, the best way is to walk away and cool down before attempting to correct your child once more.

#7. The Waiting Game
Most parents make the common mistake of threatening punishment hours after bad behaviors commence. The best way to deal with a misbehaving child would be to employ a punishment or consequence immediately rather than later.

#8. Nagging
Nagging or launching into some long-winded explanation about the goodness of vegetables or sleep will probably soar right over your kid’s head. It is better to be stern and concise when you correct your child rather that prattling incessantly.

Thus, with these 8 common disciplinary mistakes that parents often make and the relevant solutions to combat them, we hope you’ll have an easier time correcting your kid’s mischievous misdemeanors!