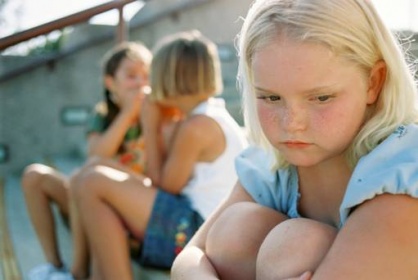 Last week, a friend wrote a Facebook post asking for advice. “Mia is getting picked on and bullied at school for being “weird”. Any advice greatly appreciated”.When I read this post I got a pang in my chest. It’s heartbreaking that an eight-year-old is being bullied. But it was also heartbreaking because I was once Mia, the child who was called names and no one would be friends with.

And the one thing that no one tells you is that it doesn’t matter how many years separate you from the events themselves, it doesn’t take much for those feelings of isolation and raw pain to resurface.

All throughout school, I was the “odd one out”; ‘the weird one’. Even some parents and teachers targeted me.The bullying became so bad that at the end of Year Four, I switched schools, where the bullying didn’t end, but was reduced. I received a lot of advice about how to deal with the bullies back in the day by people who wanted to help. ‘Ignore them’, ‘don’t let them get to you’, ‘try and make friends with them’, and ‘they’re probably just insecure’. All are perfectly reasonable nuggets of advice. It’s only natural that parents and siblings will want to do what they can to help, but when you’re young, you don’t have the language to understand and comprehend why people don’t like you. All you know is that you’re being told you’re not okay being who you are.

And that’s what bullying is – it’s a way to make someone feel bad about something about themselves they usually can’t change. It’s about creating conflict in that person. Bullying has become a mainstream issue in recent years and while it’s distressing to read about kids getting similar or worse treatment to what I had, I’m glad it’s out in the open. I don’t know whether it’s because it’s happening more often or the introduction of social media and mobiles is creating new ways for kids to be victimised, but talking about it is a welcome development

For a long time, school bullying was pushed to the side as something that just ‘happens’ or is some sort of rite of passage. I grew up thinking that if I wasn’t selected as the class target, then someone else would have been. The bullies never physically hurt me but they caused plenty of pain and that’s what they wanted – to control my feelings and wield power over me. I never realized this until much later.

It was only a growing sense of maturity that came with age that caused the bullies to back down – they had boys and clothes to play with instead of me. I got through school with no friends or confidence. All throughout school, it never occurred to me to change anything about myself to ‘fit in’, and I realised I wasn’t interested in getting approval from people who were mean to me: Once I became aware of that, I started to believe in myself again.

I don’t hold any ill will against the bullies but it’s frustrating that people so insignificant to my life can have impacted it in a very significant way. Today, I’m very much aware of how my words may affect people, so I choose them carefully. The idea of upsetting someone is horrifying because I know all too well the impact they can have. People tell you to ignore the ‘sticks and stones’ but it’s advice that only comforts the giver. Words hurt. They’re like paper cuts, leaving small but stinging marks. Only a bullied child knows how vicious silence can be.

For parents and siblings of kids going through this, there is a certain helplessness that comes with that. There are no magical cures, and when the bully targets someone, they end up impacting a whole family. But sometimes, just doing what you can can be a comfort. Reading about kids like Mia brings back the hurt, the confusion and the emptiness that filled my mind and heart on any typical school day. Time can make us wiser and smarter, but it can’t remove the memory entirely. Good or bad, our childhood lives forever within ourselves and the most unexpected smells or pictures can have us embark on a trip to the past. I do not want that for Mia or any other child.

Reflecting back on my experience of being the bullied kid, I emailed my friend something I hope she and her daughter will find useful. “Do not let them determine the person you want to be”.

The original version of this story is written by Alana Schetzer for Essential Kids.
“MummySG, where every Mum is awesome.”