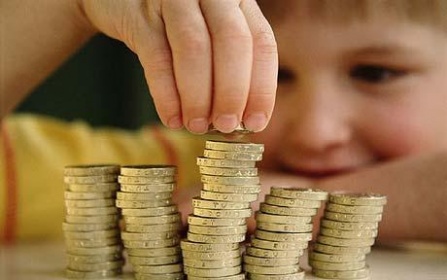 Financial prudence is best instilled at a young age. But do your spending habits, as a parent, teach your child the right values? Because you know what they say about apples falling from the same tree: They hurt when you’re under them. And also, something about not falling far from said tree, and your children imitating the way you spend money. Guest Poster Adeline (from PlayMoolah) explains:

I just spoke to a mother at one of our focus groups, who was quite anxious about the spending habits she might have taught her daughter.

Her daughter’s recent statement: “It’s too cheap, we should just buy it” started this introspection.
That, plus the fact her daughter was going to be responsible for managing her own allowance at school, contributed to an anxiety attack.

Ours is the behaviour our children learn from, and how we manage money is one of the most important lessons we can impart. Our poor friend is now over-analysing the times she spent on impulse, or perhaps gave in to requests for expensive presents. So what are some of the harmful behaviours we might unknowingly pass on to our children?

Living Beyond Your Income


This isn’t about avoiding debt. Not all debt is bad; borrowing to invest in assets that appreciate is different to financing “fun”. Luxuries like branded clothes, fancy dinners, or a car depreciate in value.
A child will associate how you spend with what you do. Recognising when your spending is tied to emotions or ego is the first step to moderating behaviour. Doing so will teach your child to avoid adopting imprudent patterns of spending.

“And if you or your brother want another one, you’ll both have to bid for it…”


Despite the smaller income stream, it’s easier to save disposable income in your earlier working years. Financial responsibilities grow over time (spouse, children, aging parents), so begin saving a percentage of your income as soon as possible, and invest in income generating assets. Let your hard earned money start making money for you.

Children need not be bothered with the complexities of multiple bank accounts and what they are for. But there are simple fun ways to help them visualise how income should be allocated for different purposes. Some parents teach children to separate their pocket money into three jars, one for saving, one for spending and one for giving.


Even very young children can appreciate this lesson. Talk about things you want, but don’t need, and therefore choose not to buy. Talk about other uses for the money. The anxious mother in our example felt she had over indulged in her daughters whims; and was now having trouble explaining why her daughter’s spending had to be reined in. Particularly when the household income was unchanged.

Well, it’s free money isn’t it? The temptation to use an unexpected bonus, a cheque from Grandma, or a pay raise on luxuries is tempting. It’s not part of the savings plan, and therefore doesn’t derail your financial planning, right?

Manny people see their parents using that windfall on short-term rewards and emulate that behaviour. Instead, use that income to pay off debt, invest in blue chip assets, or put it in a separate account to see how fast it can grow. The numbers in that account won’t look “last season” in half a year, unlike a Prada bag.


Ignoring money problems won’t make them disappear. Concealing money matters (whether good or bad) from children denies them some of the most important life lessons they need to succeed.

When household finances are discussed in an age-appropriate and calm manner, children learn to be confident in managing their own money. When parents convey stress while discussing finances, then children learn to associate money with fear, and feel unable to handle their own finances later on.

This article is written by Playmoolah in 31 January, 2013 for MoneySmart.