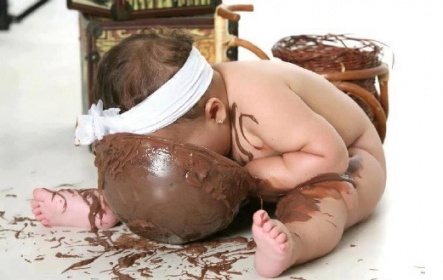 Since it’s so absolutely delicious, it’s only natural that you’d ask can I give my baby chocolate. When you’ve found something that tastes so good, you want to share it with your child and let them see that it’s a beautiful world we live in, filled with things like chocolate.

But many moms and dads may have heard that babies can have allergic reactions to chocolate. We’ve done the research and have not’t found anything that would support this idea. Most likely it’s from old wives tales that have managed to survive.

But does this mean it’s OK to give your baby chocolate? Nope. Even though you may love the taste of it and even though your baby will likely enjoy it as well, it’s best to wait until the one year mark before introducing it to them.

Can I Give My Baby Chocolate? Answer: It’s Best to Wait

Chocolate contains small amounts of caffeine and while there might not be enough in it to bother grown ups, if you’ve taken our recommendation of not giving caffeine to your baby, any amount could cause negative reactions.

It also contains other stimulants in it. The sugar alone when combined with the milk fat can be a cocktail that your baby just can’t handle. Not to mention that there is also theobromine which for an average adult can still cause a stimulating effect. You’d also be giving your child a dose of phenylethylamine which goes against our recommendation of only giving your baby things that can be pronounced. This is likened to amphetamines. That’s right, amphetamines.

Chocolate also has anandamide, which along with the previously mentioned ingredients effects the functioning of the brain. The chemicals it contains are able to effect your child’s neurologic functions, it’s best to keep them away from it, until they are pretty much fully developed.

While these may be naturally found in the cocoa bean, it’s still not a good idea to put them into your baby’s system, thus increasing their heartbeat and causing other reactions. Your baby’s body is a temple, a newly formed and still developing temple. If you treat it as such they will have a much better time during their childhood and not have as many eating disorders or food issues later in life.

Some people believe that chocolate also has properties of a laxative, and your baby shouldn’t need much help in that area. While the evidence to support this is not plentiful, it should be one more reason why you’d want to avoid giving it to your baby, in any amount.

As adults we love all sorts of chocolate and are always finding new ways to make it even more delectable. But there’s a time and a place for everything, and sooner or later your baby will be an adult and fully aware of all of the chocolate wonder around them. There’s no need to jump the gun and get them hooked on the stuff before they even know what it is.

Even though you might think your baby is getting bored with the same mundane baby food and formula day after day, and that they would enjoy a nice bit of chocolate every now and then to wake up their taste buds and eat something decadent. This is a classic case of transferring your thought process to your baby.

Since they do not know that a whole world of food and tastes exists outside of their realm of consciousness, they won’t get bored with what you’re feeding them. It’s simply that you’re getting bored with what you’re feeding them. It can be quite boring to give your child the same thing day after day after day. Try introducing new fruits and vegetables after six months instead of resorting to giving them their first dose of chocolate.

So sit back, relax, have a chocolate bar for yourself and know that one day they’ll be old enough to enjoy it with you. In the meantime continue giving them only formula and breastmilk for the first 6 months and then wholesome, organic foods from 6 months to a year. For their first birthday you can give them a piece of chocolate cake and watch them make a mess of themselves.