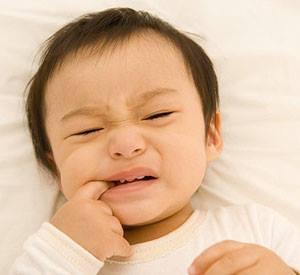 Drool, crabbiness, and ear pulling are just a few of the signs that baby teeth are on their way.

You may not be able to predict exactly when the teething fairy will pay a call, but a number of signs can show she’s on the way. The type and severity of those symptoms vary wildly from baby to baby — for one baby, teething means lots of discomfort and big-time tears, while another child might breeze right through to a mouth full of teeth without a complaint. Still, you can expect to see at least some, and maybe many, of the following symptoms (some of which can precede the actual appearance of a tooth by as much as two or three months — so hang in there Mom!):

12 Signs of Teething in Babies

1. Drooling. It’s hard to believe so much fluid can come from the mouths of tiny babes, but teething stimulates drooling, and the waterworks are on for many babies starting from about ten weeks to three or four months of age.

2. Chin or face rash. If your teething baby is pouring out prodigious amounts of drool, she may develop a dry skin rash or chapping around her mouth and on her chin (or even on her neck), because of contact with saliva. Patting away the drool will help prevent the rash; if it has already developed, moisturize it with a gentle skin cream.

3. Coughing. All that drool can make babies gag and cough (you’d choke too with a mouthful of spit). It’s no cause for concern, if your baby has no other signs of cold, flu, or allergies.

4. Biting. Pressure from teeth poking through under the gums causes baby a lot of discomfort — and that discomfort can be relieved by counterpressure, aka, biting. Teething babies will gum whatever they can find, from teething rings and rattles to your soon-to-be sore nipples (if you’re breastfeeding) and fingers.

5. Pain. The inflammation of tender gum tissue can cause what seems like terrible pain to some babies, but it hardly affects others. First teeth usually hurt the most (as do the molars, because they’re just plain bigger), although most babies eventually get used to what teething feels like and aren’t quite so bothered later on.

6. Irritability. Your baby’s mouth will ache as that little tooth presses on the gums and pokes up to the surface, and, not surprisingly, it’ll probably make her feel out of sorts. Some babies may be irritable for just a few hours, but others can stay crabby for days or even weeks.

7. Refusal to feed. Uncomfortable, cranky babies yearn to be soothed by something in their mouths — whether a bottle or the breast. But the suction of nursing may make a teething baby’s sore gums feel worse. For that reason, teething babies are fussy about feedings (and get more frustrated as neither their discomfort nor their hungry tummies find relief). Babies eating solid foods may also refuse to eat during teething (though check with your pediatrician if your baby shuns several feedings).

8. Diarrhea. Doctors are divided on the subject, but some parents swear that their teething babies have bouts of loose poops (perhaps from all that swallowed drool). It may or may not happen — but do make sure to always report any diarrhea to your baby’s doctor if it lasts more than two bowel movements.

9. Low-grade fever. Doctors are reluctant to definitively link teething to fever — in part because the first teeth pop in around the same time that babies lose the immunity they acquired from Mom, making them more susceptible to infections and bugs. But like inflammation anywhere else in the body, inflamed gums can sometimes produce low-grade fever (less than 101° F, measured rectally). Treat it like any other low-grade fever — with a call to the doctor if it lasts for three days.

10. Wakefulness. The teething fairy doesn’t only work days. As your baby’s teeth begin to emerge, her discomfort may disrupt her nighttime slumber (even if she previously slept through the night). Before offering comfort, see if she can settle herself back to sleep; if she’s still restless, soothe her with patting or lullabies but avoid a return to nighttime feedings (which will come back to haunt you when teething is done).

11. Gum hematoma. Teething can trigger bleeding under the gums, which looks like a bluish lump. It’s nothing to worry about and can heal faster (and feel better) with the help of a cold compress.

12. Ear pulling; cheek rubbing. Teething babies may tug furiously at their ear or rub their cheek or chin. The reason? Gums, ears, and cheeks share nerve pathways, and so an ache in the gums (especially from erupting molars) can travel elsewhere. (Babies with ear infections will also yank on their ears, so do check with your pediatrician if you suspect your baby may be bothered by more than just teething.)