Since it’s holiday season, many of you may be going for a vacation and take a swim. But don’t you know that other than the necessary precautions we need to take as guardians of our children whenever they swim, we also need to know an alarming condition called, “secondary drowning.” This is the best time to remind us of what it is and what to do if our kids are acting strangely after swimming.

According to Fox 4 News, “secondary drowning is a term that’s being thrown around on social media and even in news reports recently, and while it’s getting a lot of attention now, doctors say it’s been a problem for as long as people have been around water.”

A little boy named Ronin nearly died weeks ago. Ronin accidentally ended up in the water, but his mom got him out in seconds. Still, he had inhaled enough water to nearly kill him due to something called secondary drowning according to a blog by his mom.

According to Dr. Hoehn, secondary drowning usually only happens when someone nearly drowns.

“Kids every day at swimming pools cough and choke a little bit. The question is: Did they get enough to cause this whole body reaction?” Dr. Hoehn said.

The way parents can tell if their kid is in danger is by closely monitoring the way they act after swimming for example, are they walking differently, maybe having accidents? If you suspect something’s wrong, don’t allow them to sleep.

“You do have to worry about putting them to sleep because if they’re not aware that their oxygen level is low, they might just go to sleep and not wake up,” Dr. Hoehn warned.

Instead the best course of action is to take them to the emergency room to check on their oxygen levels.

The good news is, if it’s caught in time, a few days on a ventilator can allow someone to make a full recovery, much like little Ronin did.

Read more on Secondary Drowning on the next page: 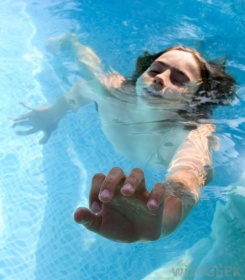 Here’s another point to note:

Secondary drowning can happen in any water. A small amount of water can get in the lungs and inflame them and then it will cause it to pull more fluid into the lungs or like it says, lower the oxygen levels. Any sudden inhalation of any liquids including drinks, can cause aspiration into the lungs.

Children who experienced a near-drowning should be watched closely after leaving a swimming area.Vomiting or involuntary defecation immediately following a swimming session should be considered a red flag. A sudden change in personality or energy level, such as agitation or extreme lethargy, may be a sign of oxygen deprivation.Other signs of secondary drowning include difficulty breathing, sudden mood swings and extreme fatigue.

If a child has inhaled water while swimming, he or she should be observed for several hours for signs of labored breathing or altered mental status. Successful treatment for victims depends on a swift response and a quick diagnosis by trained medical personnel.

Make sure not to delay if you suspect your kid experienced near-drowning, rush him to the hospital!

Please SHARE this article with everyone. You could save a life.