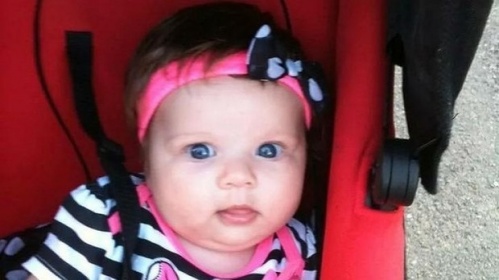 The death of a three-month-old girl has sparked warnings for parents about the dangers of letting babies sleep in bouncher and swings.

An inquest in the UK has heard baby Leia-Mae Smith was sleeping in a bouncer while her mother and an older sibling slept on a couch nearby.

The family had fallen asleep after a day out shopping in June last year and Ms Jones awoke at 4.30am to find her daughter was not breathing.

In a heart-breaking statement to the court 24-year-old Ms Jones, from Gloucester, told of her horror at finding her baby unresponsive and with blue lips.

“I woke up at around 4.30am and saw that Leia-Mai was not breathing and her lips had turned blue,” she said.

“I took her out of the swing, gave mouth-to-mouth resuscitation and dialled 999. When the paramedics arrived I pleaded with them to get my baby to breathe.

“It all seemed so unreal, like a bad dream, and I thought I would suddenly wake up and it would all be okay. I love my children dearly and live every day with this pain. She may just have been a baby but she was my baby.”

A label on the baby bouncer Leia-Mai was in warned children should not be left in it unattended. Since the the baby’s death it has been changed and now parents are warned that baby bouncers are “not intended for long periods of sleeping”.

The inquest was told the cause of Leia-Mae’s death was inconclusive. Pathologist Dr Thomas Martin said Sudden Infant Death Syndrome was a “possibility”.

“Sudden Infant Death Syndrome was investigated but we cannot prove that this was a cause of death,” he said.

“There were fears that the baby had a viral infection some days before death but my examination found no signs of any infection.

“A genetic report found an excess of DNA in the baby’s cells but it is not likely this played a part in her death.”

Gloucestershire senior coroner Katy Skerrett concluded that no cause of death could be found.

“The swing has a warning label attached to it, stating never leave child unattended. Leia-Mae’s mum fell asleep and awoke at approximately 0430 hours on the 15th of June.

“She immediately discovered that Leia-Mae was not breathing and called an ambulance. Paramedics attempted resuscitation but were unable to revive Leia-Mae and she passed away at her home address.

“The pathologist was unable to provide a cause of death. There are features of hypoxia present but also sudden infant death syndrome remains a possible cause.”

A statement on the SIDS and Kids Australia website warns parents that bouncers are not subject to Australian standards and should be used carefully and only under supervision.

“Accidents have occurred where baby has become trapped in the restraining, when the bouncinette has fallen from a high surface or been placed where baby could get caught in curtain or blind cords,” the statement reads.

“Deaths have occurred when baby has been left unsupervised to sleep in a bouncinette.”