I received the following via WhatsApp and am severely stunned by the vicious bullying alongside episodes of violence this 14-year-old girl has had to endure in school.

Schools should be safe havens for kids to grow, learn and thrive. She was most brave to speak up and push for changes in how schools respond to bullying. As parents we should trust the principal and teachers to ameliorate wrongdoings ... but if not enough is done, what then? I hope the PM does read her letter and look into this... sigh...

Kindly feel free to spread word about said poor child's predicament; the issue of bullying must never be simply swept under the carpet. 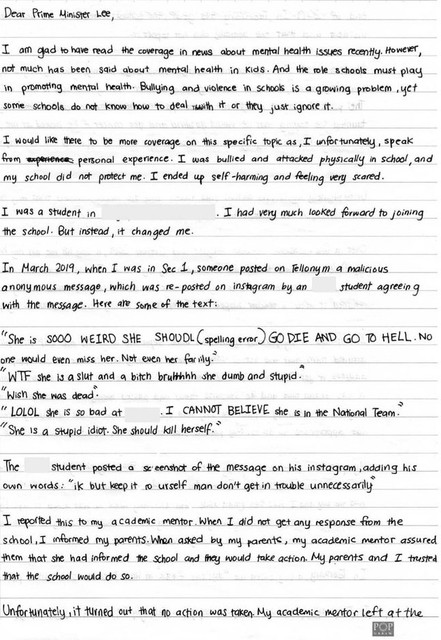 SINGAPORE — A 14-year-old student and her parents are disappointed with the response from the Ministry of Education (MOE) to what they say was sustained bullying of the girl both online and at school. The incidents caused her to attempt suicide and left her in the hospital for 12 days.


Responding to TODAY’s queries, MOE on Friday (Dec 18) acknowledged one lapse in the school’s handling of a report by the girl regarding a bullying incident. However, it said that the school had taken effective disciplinary action over other bullying incidents affecting the student.


The family has requested anonymity to protect the girl, who is in a fragile state. They said that for almost a year, while the girl was in Secondary 1 last year, she was bullied by at least five boys in separate incidents after being told to kill herself in an anonymous social media post.