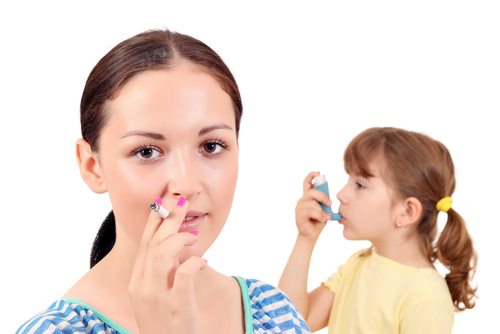 I was a smoker – an ardent one at that. It was routine for me to visit the mamashop below my block for a new pack every morning on my way to work. One stick every hour was standard, and without the flimsy, white poison-filled stick, I was nothing.

Thus, after the shock and initial pleasantry of finding out that I was pregnant, reality sunk in – I had to give up smoking; it was only right to do so.
I was more than unwilling to forgo the habit forged over nearly a decade. I knew of friends who continued smoking throughout their pregnancy. Even though I knew I was lying to myself, I managed to coaxed myself into thinking if they could produce fine babies while chain smoking, so can I.

With shame, I picked up my semi-crumpled packet of smokes, twiddled a stick in between my thumb and forefinger, and finally popped the filter-end into my mouth. Reaching for a lighter, I lit my cigarette.

Little did I know that that would be the last cigarette I would ever introduce into my mouth again. It might be a coincidence, but I realized that I was bleeding about 20 minutes after that stick. My husband and I rushed to our gynecologist with fear and dread in our hearts.

We were lucky. Baby is still fine, and so were all her vital stats. The bleeding went unexplained as nothing wrong could be found, but I was immediately prescribed Duphaston – a progesterone medication which I had to be on for the whole of my first trimester.

The medication made me throw up everything I ate. It was not pleasant seeing chunks of yesterday’s dinner floating in the toilet bowl, and I felt miserable throughout the day. However, I also noticed that this terrible morning sickness caused me to feel sick whenever I came across the smell of cigarette smoke.

To quote Welch, the Chairman of the Department of Obstetrics and Gynecology at Providence Hospital in Southfield, Michigan, “smoking cigarettes is probably the number one cause of adverse outcomes for babies”.

And this is very true. Countless researches have shown that smoking during pregnancy increases significantly the risk of complications such as premature birth, low birth weight, stillbirth, among others. Which mother would want to put their precious babies through such ordeals?

For those who are into facts and numbers, cigarette smoke contains more than 4,000 chemicals, none of them human-friendly. They contain at least 60 cancer-causing compounds, which will enter the mother’s bloodstream to be passed on to her baby.

I took in my last stick of cigarette on 12 May 2010, the day I found out that I was carrying my daughter. To be honest, the road to a smoke-free life was not easy – it was in fact excruciating to break a habit after so long. I was lucky to have this journey cut short with the help of my morning sickness. Others were not as lucky.

Here are some tips to successful quitting:

For me, I threw away my pack of cigarette and all the lighters and ashtrays I had around the house. Every time I had an urge to smoke, I thought of my daughter floating in the water bag, unaware of the harm I was about to bring her, and with nowhere to run. I fed my mind with horror stories of the effects of smoking while pregnant.

My withdrawal symptoms were thankfully merciful, with only restlessness and frustration with not being able to ‘get it’. I was over smoking in 2 weeks, largely due to the support of my husband, who gave up smoking together with me. Today, my husband and I are no longer smokers, and we are proud of how we got here, and intend to keep it that way. It took a lot of determination and hard work, but we eventually hit our goal.

We all have it in us; it is all a matter of choice. Quit smoking today for your children.