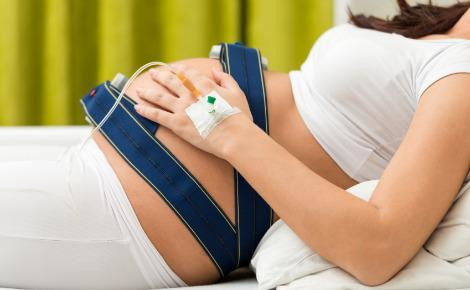 In this article, I’ll share my own experience of giving birth. I had a normal pregnancy, other than the fact that I had vomiting (thrice a day) till the 7[SUP]th[/SUP] month and so I didn’t gained any weight other than the baby’s weight. My ultrasounds showed a normal healthy baby girl. Since it was my first pregnancy, I was excited and scared at the same time. I read a lot about the signs of labour so that I know when it finally happens to me. I was 40 weeks pregnant and still nothing happened. I was so much frustrated, that I even thought of going for a planned C-section. But my obstetrician insisted that we should try to keep things as natural as possible because although C-section may be painless initially, it requires a lot of post-natal care.

After waiting for another week, my doctor decided to go for an induced delivery. I was admitted at 12 at night. The first treatment I got was Foley Catheter. A balloon like thing (deflated) was inserted inside the vagina, between the amniotic sac and the lower uterine segment. The balloon was then inflated with a saline solution and left in place. The process was painless and its purpose was to open the cervix mechanically.

I was taken to the labour room around 5 a.m. Still no pains. The cervix had dilated 1.5 cm. For delivery, you need 10 cm of dilation. A nurse gave me enema (a liquid introduced into the rectum via the anus) to empty bowels, thus eliminating the possibility of waste matter in the rectum hindering the baby’s descent through the birth canal and preventing contamination of the sterile birthing field. I had to rush to the restroom 5 min later. Later, a nurse came and administered intravaginal prostaglin (a tablet inserted in the vagina to induce labour). In hardly 15 min, I started having pains. They were around 1 minute apart and were bearable. I had dilated 4 cm. The doc advised me to take a walk for 10 min. It was a nice change to leave the room and walk in the corridors.
When I got back they performed ARM (artificial rupture of membrane). An amniohook (a long plastic device that looks like a crochet needle with a sharp point at the end) was inserted in vagina to puncture a hole in the amniotic sac. I felt my water bag burst.

The pains were stronger and frequent now. They gave me IV drip of picotin too. Within half an hour, my obstetrician came and told me that I had dilated and was ready for delivery. My legs were fitted in a frame and my husband was asked to hold my thigh so that I can push easily. The pains were now 10 seconds apart and were totally unbearable. The doc asked me to focus on my breathing and to push. I pushed for 6-7 times with every pain but the baby didn’t move an inch. Then the baby’s heart beat began to drop. The doc made a cut in my perineum and went for the vacuum assisted delivery immediately. The suction cap was fixed on the baby’s head and they pulled out my baby when I had my next pain. My daughter was born at 1:33 p.m. weighing 8.2 lbs.

Suddenly it was all over. All the pains were gone. I was totally exhausted. They cut the baby’s cord, cleaned her up and put her in a cot beside my bed. My little angel was staring at me. She too seemed to be in a shock. I didn’t feel a thing as my placenta was delivered, though the stitching was a bit painful. I was cleaned up and a nurse brought my baby and held her while my baby took her first feed.
It was an unforgettable experience and I feel I wouldn’t have survived it, had my husband not been with me all throughout.

(P.S: The procedures I have mentioned here may not be part of every induced labour, as every case is unique. It is also said that induced labour tends to be more intense and painful for women as compared to natural labour.)

What to expect when your water breaks

The Phases of Labor