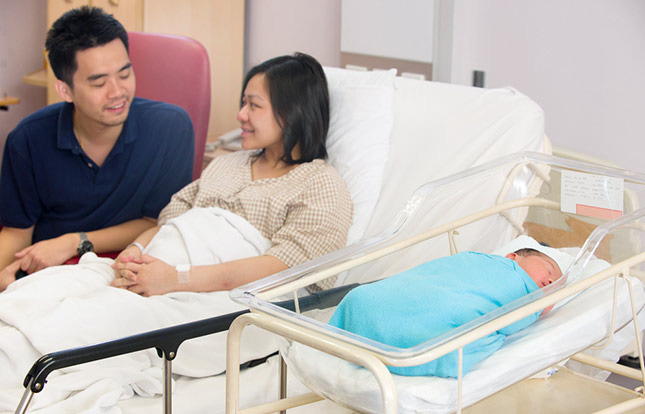 During the final trimester, I’ve planned for an induced delivery on the 39 weeks of pregnancy. I was so excited and very much looking forward to meet my little princess, but at times I was very worried about the whole labor process. Hence, I read a lot of article with regards to labor and hoping that from there I could gain some ‘experience’.

When I was admitted, I was already 3cm dilated. While waiting in the labor ward for my Obstetrician to perform the artificial rupture of membrane, my thoughts went wild. I asked my hubby a lots of “What if…..?” I’m afraid that there might be complication during the labor process. And at one point of time, I got so anxious when I couldn’t feel my baby’s movement. It was so crazy.

Two hours later after I was admitted, my Obstetrician performed the artificial rupture of membrane. My hubby videoed the whole process. In fact it was a fast one and I felt a huge flow of warm liquid flowing out from my vaginal. Then, I was given Pitocin through an IV drip which cause my contractions to be longer and stronger hoping that there will be a corresponding increase in the dilation of my cervix.

I was told by my Obstetrician to be prepared for the fact that the first 4 or 5cm of dilation often come quite slowly and true enough for mine to reach from 3cm to 5cm took five hours. I was tired and running out of patience. The pain was unbearable but I insisted not to be given any epidural for pain relieve. It was tough and in between I broke down many times.

Contractions were more intense lasting on average 45 to 60 seconds spaced 2 to 5mins apart. My midwife told me to relax as much as possible between contractions and changed positions to get into more comfortable position which really help to alleviate some of the pain.

14 hours passed. The labor pains became more closely spaced, and last longer. I began to feel strong pressure in my perineum and both my legs shake. My midwife gave me the instruction to push and I tried so hard and got exhausted. It was so miserable.

My Obstetrician noticed that my baby’s heart beat had dropped and insisted to perform episiotomy so as to speed up the birth process. He told me that he will give me another 10mins to push and if there’s still no progress he will be using the vacuum extractor to assist delivery. I got so worried. Suddenly I recalled one of the article that I read “Squatting for Birth” and I asked my Obstetrician if I’m allowed to do so. He gave the green light and I got into position, used my last source of energy and pushed.

Finally my little princess was born. I was weeping uncontrollably and I told my hubby that I should have thought of the method earlier to speed up the whole labor progress.