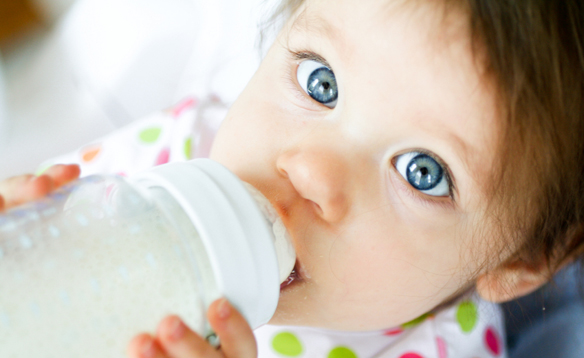 You may be wondering why there are still a lot of toddlers running around with their bottle. It is probably because their parents have difficulties in weaning them. Babies over the age of one are more resistant to change as they are so attached to the bottle. So the more you delay weaning off the bottle, the harder it’s going to be for you to break the habit. Also, prolonged bottle usage can cause tooth decay or improper dental development, ear infection, obesity and lack of interest in eating.

In general, parents can start introducing sippy cup when baby is around 9 months old. Some parents think sippy cup with spout is just the same as bottle, so it’s okay if you skip it and move to straw cup instead, when she’s ready. Allow her to familiarize herself with one until they figure out what they are supposed to do with it. Be prepared, you might need to experiment with a couple different types of cups later on, if your budget allows. But the more important thing is to offer the cup daily. Do take note weaning should take place during a relatively stress-free time. I don’t recommend to start when a new sibling has just arrived or when the family is moving to a new house.

Substitute a cup for a bottle at one feeding during the day and slowly decrease the number of bottles she receives. You can also try to give her half of the milk in the bottle first. After she finishes it, offer the other half in the cup. During weaning time, fill the cup with milk or water only instead of juice. There may be times you may need to distract your child from thinking about and wanting the bottle. You can do games with your child to make this emotional transaction easier on both of you. The most difficult part is probably to eliminate nighttime bottle. Slowly but surely dilute the milk by increasing the amount of water.

Weaning process should be approached with consistency. It is a long, gradual process. So dont’t be surprised if your child gives up her bottle only when she’s 18 months. Expect lots of crying, whining but dont’t give in. Also, knowing your child will help you device ways of weaning your child with minimal effort. Based on her personality, map out your own strategy with these tips as guidelines.