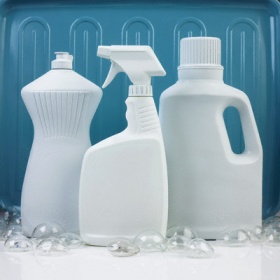 No one wants to hear it, but more disturbing news came out around the second week of May 2012 from the European Environment Agency (EEA) indicating that many household products, cleaners, cosmetics, and food contain chemicals that affect hormones — and not in a good way. On May 10, the organization issued a release saying that “endocrine-disrupting chemicals” — meaning ones that affect the hormone system by either blocking the normal effects of hormones or mimicking hormones — seem to be a contributing factor to “significant increases in cancers, diabetes and obesity, [and] falling fertility.” Since reproduction and fertility are, of course, directly tied to hormones, the effects of these chemicals on a woman’s ability to conceive and a man’s ability to get a woman pregnant may be even more pronounced.

The release went on to list some possible effects of these chemicals, including some that lead tolow-quality semen in men. Animal studies have shown the chemicals affect the reproductive systems of a wide variety of animals. It’s very difficult to test the effects of these chemicals, since they could have been involved — and hindered — early development of a person’s reproductive system (as well as brain, immune, and other bodily systems), but the effects wouldn’t be seen for many years or decades.

Just as worrisome, another report came out this week in the journal Environmental Health Perspectives with the finding from a Harvard University study that exposure to bisphenol A (BPA) may reduce a woman’s chances of conceiving if she’s undergoing in vitro fertilization (IVF). The study looked at 137 women who were having fertility treatment at Massachusetts General Hospital Fertility Center; the researchers measured BPA levels in the women at the time of treatment. What did they find? “The results show a clear trend of increasing implantation failure [in which an embryo doesn’t implant in a woman’s uterus] with higher BPA levels,” reported EnvironmentalHealthNews.org.

BPA is a very common chemical used in the manufacture of many plastics, including some water bottles, the linings of canned food, grocery store receipts, and other everyday items. The Environmental Working Group offers these tips to help lessen your exposure to BPA.

Fertility expert Dr. Robert Greene also offers this good advice about how to reduce your exposure to environmental toxins as you’re trying to conceive.

Article is written by Lorie A. Parch for www.conceiveonline.com in May 17, 2012.