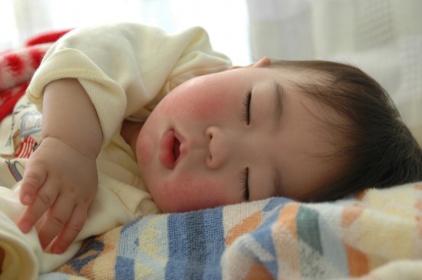 Researchers from Temple University recently completed a study that found that it is more beneficial for mothers to let their infants cry themselves back to sleep rather than comforting them in the middle of the night.


According to the researchers, pediatricians report that waking up in the middle of the night is a common concern for parents of infants. The study, recently published in Developmental Psychology, showed that infants were better left alone to self-soothe. The scientists looked at the babies’ ability to fall asleep on their own as well as their patterns of nighttime sleep awakenings between six months and 36 months of age.


“By six months of age, most babies sleep through the night, awakening their mothers only about once per week. However, not all children follow this pattern of development,” remarked Marsha Weinraub, a child-development expert who studies parent-child relationships, in a prepared statement.


“If you measure them while they are sleeping, all babies — like all adults — move through a sleep cycle every 1 1/2 to 2 hours where they wake up and then return to sleep,” explained Weinraub. “Some of them do cry and call out when they awaken, and that is called ‘not sleeping through the night’.”


In the study, the parents of over 1,200 infants participated in reporting on their child’s awakenings at six, 15, 24, and 36 months. By six months of age, 66 percent of the babies, known as the sleepers, awakened their mothers only once per week; as they grew, there was a flat trajectory. For the other 33 percent, the transitional sleepers, they woke up seven nights per week at six months, and then woke two nights a week by 15 months, then one night per week by 24 months. The majority of babies who woke up were boys, and these transitional sleepers also showed to be more irritably and distractible. These infants also had a greater likelihood of being breastfed, while the mothers of these babies had a higher possibility of being depressed and having more maternal sensitivity.


Based on the findings, the researchers believe that genetic or constitutional factors such as those that might be reflected in difficult temperaments appear implicated in early sleep problems.


“Families who are seeing sleep problems persist past 18 months should seek advice,” noted Weinraub in the statement.


The scientists also proposed that mothers give children the opportunity to learn to fall asleep on their own.


“When mothers tune in to these night time awakenings and/or if a baby is in the habit of falling asleep during breastfeeding, then he or she may not be learning to how to self-soothe, something that is critical for regular sleep,” continued Weinraub in the statement. “The best advice is to put infants to bed at a regular time every night, allow them to fall asleep on their own and resist the urge to respond right away to awakenings.”


In the past, the National Institutes of Health (NIH) have promoted campaigns to help lower the risk of sudden infant death syndrome (SIDS) by promoting a safe environment for infants to sleep.


“In recent years, we’ve learned that many of the risk factors for SIDS are similar to those for other sleep-related causes of infant death,” said Dr. Alan E. Guttmacher, Director of the Eunice Kennedy Shriver National Institute of Child Health and Human Development (NICHD), in a prepared statement. “Placing infants on their backs to sleep and providing them with a safe sleep environment for every sleep time reduces the risk for SIDS as well as death from other causes, such as suffocation.”

This article is written by Conni K. Ho forredOrbit.com.