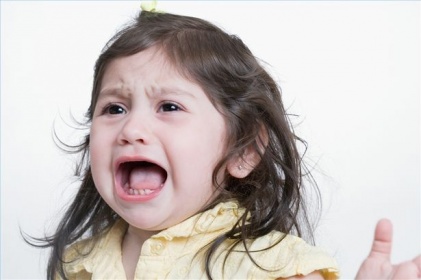 Temper tantrums are equally common and normal among toddlers; it is a part of growing up. Children who are from ages 2 to 4 usually throw a fit when they are upset and frustrated and having a very difficult time to send their message or feelings across to us, adults. And true enough, when our children are swept up in a tantrum, they are unable to listen to reason, though they will respond – negatively, taking us by surprise. Thus, it is important to come prepared by understanding what causes them in order to know how to respond to them.

“Temper tantrums are emotional and physical “meltdowns” common amongchildren in the 2- to 4-year-old age range. The toddler may demonstrate a number of characteristic behaviors, including screaming, kicking, lying on the floor, and occasionally holding his breath (rarely to the point of passing out). As a child matures, these manifestations of emotional, developmental, and physical immaturity gradually extinguish themselves. Studies indicate that 23%-85% of children between 2 and 4 years of age will commonly have temper tantrums.”

What causes temper tantrum in toddlers?


A toddler’s view of the world is egocentric; “I want what I want, when I want it!” This narcissistic view of their world is coupled with an incomplete and unbalanced development of expressive language skills when compared with their more complete receptive language skills. The receptive language of a 2-year-old child is numbered in the thousands, while the expressive skill generally is 150-200 words. Perhaps more frustrating for the toddler is the receptive ability to understand complex sentence structure while only able to express his thoughts in two- to three-word phrases.


The toddler world is full of exploration and discovery. Commonly, young children learn by observation and attempting the same or similar task. This (from a parental perspective) is fine when it comes to desired behaviors (such as toilet training). However, playing with the TV remote control is not part of these desired behaviors, unless you are a toddler and don’t discriminate with regard to goals. When a parent’s desire for safety and limiting chaos clashes with their young child’s fierce struggle for autonomy and limited language capabilities, the temper tantrum is almost inevitable.


6 Gentle Ways to Respond to a Tantrum

1. Be present: Staying close by and supporting a child during their tantrum is a gentle and kind way to let a child know they have support to feel their feelings fully. While it may not be easy to just sit and watch, children often just need a kind and compassionate presence during a tantrum.

2. Make Eye Contact: It’s tempting to walk away from a tantruming child, but often, trying to establish some non threatening face-to-face contact can help a child sense your genuine concern and feel validated.

3. Use kind words: Using gentle and kind words sparingly during the tantrum such as “I love you”, “I’m here for you” and “I’m on your side” can help a child to re-center and find a positive mindset. Plus focusing on kind words can help us not lose sight of staying positive and helping our child cope.

4. Kind Hands: Offering a hug or a hand to hold can be a very grounding yet positive way to connect with a child and help a tantrum subside. By using touch in a positive manner we also help children learn that even while upset or angry, hands can be using in a positive way and not for harming others. Sometimes children don’t want to be touched, that is ok too, in that case, just try being close by for support.

5. Listen: Children often need someone to help them reflect on their choices or sort out their feelings. Listening and repeating back to a child what we understand makes a child feel better understood. Often this can avoid a tantrum all together, and is a great way to decode some of the frustration.

6. Focus on solutions: Once you have been able to connect trough touch, eye contact and listening, invite you child to help you find a possible solution to whatever caused the initial tantrum. It’s possible that your child really just couldn’t express their need without some help and became frustrated, or that a need such as tiredness, hunger or some attention may be needed.

Should children be punished for having temper tantrums?


Temper tantrums in 2- to 4-year-old children are considered an essential part of normal child development. By the time they are less frequent, children have substantially increased their expressive verbal skills. In addition, they have developed alternative and more successful techniques for achieving their goal. Such maturation requires that parents provide proper role modeling for their toddler. Therefore, it is important to note that parents who lack effective anger- and conflict-management skills often provide the opposite. Yelling and screaming, throwing objects, and physical violence will both terrify a child and serve as an object lesson of how powerful people handle frustration.


Can temper tantrums be prevented?


While elimination of all toddler temper tantrums is an unrealistic goal, lessening their frequency and intensity is a realistic one. Developmental pediatricians offer these suggestions:

Temper tantrums are common emotional and physical outbursts of screaming, kicking and crying in toddlers. These fits of frustration stem from an inability to express themselves. Parents should be able to handle temper tantrums gracefully and try hard not to not get distracted by all the wailing. It is the job of each parent to direct their children to the right path.