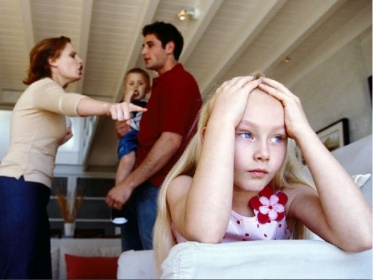 Fighting in front of your kids is nothing but an abuse. Disagreements and arguments are natural to any relationship, but if disagreeing means shouting at each other and calling names, that’s an entirely different story. In a three-year study of more than 300 families, researchers showed children films of adults arguing in different ways, and talked to children about their parents’ fights. The study finds that even though your argument may have nothing to do with the kids, if you fight the wrong way, it threatens their emotional stability.


They may not listen when told to clean their rooms, but when Mum and Dad are having a raised voices, door-slamming fight, children are all ears. And what they are hearing isn’t good for them as arguing in front of children can cause them serious damage.


Children who are threatened at an emotional level by the wrong way of fighting are shown with an increased levels of depression, anxiety, aggression and hostility. Verbally or physically aggressive fights, the “silent treatment,” intense quarrels and arguments concerned with or involving the child are the worst ineffective fights for children.


But when conflicts are handled constructively, kids learn to compromise, compassion, and to use humor and warmth to solve disagreements. They also learn that conflict with someone you love is not the end of the world.


So how should parents manage? How can you fight the right way?


Holding in your anger or disappointment for the sake of the kids isn’t the best idea. “Unspoken tension can be more stressful than actual fighting,” says Dana Dorfman, Ph.D., a psychotherapist and family counselor in New York City. “Kids will fill in the blanks of what you’re not talking about and will let their imaginations run wild.” It’s best to address the issues now before the silent treatment sets in.


Your kids will face their own share of sandbox spats and playground throw-downs, so think of your own skirmishes as teaching opportunities, says Dorfman. Model appropriate behavior: Avoid demeaning words, express your feelings (“I feel frustrated because…”), and keep your hands to yourself.


Arguing in front of the kids can teach them an important lesson: People can disagree and still remain connected. “Disputes don’t terminate relationships,” says Dorfman. Talk to your children about it. Tell them “Mommy and Daddy fight sometimes, but we always love each other and we’ll work it out.”


If your kids saw the fight, make sure they see a reconciliation, too. And don’t try forcing a superficial one for their sake. “Kids will pick up on that, too,” says Dorfman.


In the end, every parent has a choice: either vent his/her impulse or love his/her children. Those are mutually exclusive. When parents fight in front of their kids, they are putting their need to explode ahead of their kids’ best interest and peace of mind. So who do you choose? In your home, how do fight with your spouse?