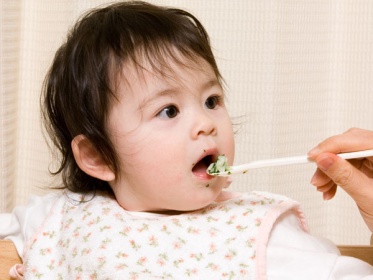 In our forum, this type of question has been asked for numerous times: “What foods can I already give my baby now that he is 4 months old?” In spite of the messages from health organizations, some recommendations or sometimes, old wives’ tales, have a lot of babies starting on solids before they even reach 6th month. In some countries like US and UK, there are people who already allow giving food to infants who are as young as 2 months! Some mums fret about introducing solids at a younger age because of remarks, such as, “Your baby is too small.” or, “Your baby is big enough!” The truth is, we all need not to rush, especially some of our first-time mummies who are very eager to introduce solids to their babies. Why?

According to kellymom.com, “Health experts and breastfeeding experts agree that it’s best to wait until your baby is around six months old before offering solid foods. There has been a large amount of research on this in the recent past, and most health organizations have updated their recommendations to agree with current research. Unfortunately, many health care providers are not up to date in what they’re telling parents, and many, many books are not up to date.”

The following organizations recommend that all babies be exclusively breastfed (no cereal, juice or any other foods) for the first 6 months of life (not the first 4-6 months):

Most babies will become developmentally and physiologically ready to eat solids by 6-9 months of age. For some babies, delaying solids longer than six months can be a good thing; for example, some doctors may recommend delaying solids for 12 months if there is a family history of allergies.

Here are the benefits we can all reap from delaying solids:

Although some of the reasons listed here assume that your baby is breastfed or fed breastmilk only, experts recommend that solids be delayed for formula fed babies also.

1.Studies have shown that for a young baby solids replace milk in a baby’s diet – they do not add to baby’s total intake. The more solids that baby eats, the less milk he takes from mom, and less milk taken from mom means less milk production. Babies who eat lots of solids or who start solids early tend to wean prematurely

2. Waiting until the cells lining the baby’s gut have closed helps prevent many allergies, gas, rashes, and medical issues

3. Waiting also shows less incidences of gastroenteritis, diabetes, and obesity (as much as six-fold!) and even ear infections.

5. Baby is much less likely to choke — even on purees — when baby is older, and can also sit upright of their own accord (babies should never be fed foods leaning back).

6. Baby’s gut doesn’t produce enzymes to aid in digestion until 3-4 months, and the ones that break down more complicated fats, starches, and carbohydrates won’t be produced until 6-9 months, meaning lots of gas, constipation, vomiting, and wasted nutrients before then. Even generally fussiness months later is noted in babies who were started too early.

7. While some babies may be ready between 4-6 months (no evidence has ever shown anything but risks earlier), it’s impossible to tell without looking with a microscope in the gut, so waiting until 6 months minimum is a safer move for all babies.

8. Waiting until your baby can pick up and put food into their own mouth while sitting up straight is a clear sign of readiness, especially if they can gum and swallow the foods. The Department of Health’s Infant Feeding recommendation actually suggests allowing babies who show readiness before 6 months to play with finger foods (that’s right, no purees), as it’s also unlikely they will swallow before they’re biologically ready.

9. The tongue thrust reflex is to help prevent choking, but spoons of liquid purees can often get past it, since the reflex point is farther forward than an adult’s gagging reflex. Putting food in the front of the mouth and allowing baby to move it back, which they can’t do until often after 6 months, helps prevent choking and is also, of course, a sign of readiness.

10. Most parent assumptions about when babies are ready are related to other biological norms — waking up at night, reaching for food, mimicking your eating, wanting to eat more — and are confused for signs of readiness. Having a set date AND a list of readiness signs helps prevent early introduction based on confusion about normal behaviors.

11. Babies who start solids later can feed themselves and are not as likely to have allergic reactions to foods.

12.The early introduction of solids is associated with increased body fat and weight in childhood. Thus, delaying solids helps protect our babies from obesity.

Of all these advantages that we AND our baby can get from delaying solids, we are hopeful that we stop rushing our babies and instead become more observant whenever our baby is ready. Our patience will definitely pay off.