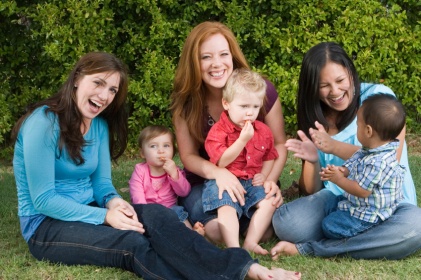 “Searching for a BFF with a babe can be a daunting task, but there are a few strategies that can improve your odds of finding The One.“

You’re both at your cars, conversation is dying out, and suddenly, you’re feeling bashful. Shuffling your feet and avoiding eye contact, you take the big step. “So, what are you up to the rest of the week?” Your heart pounds, your palms sweat, and you are back in junior high again. But instead of pimply John Rodgers, you’re faced with an infinitely more appealing prospect: a potential mommy friend.

After college, making new girlfriends feels a lot like dating. You want to show an interest, but you don’t want to come on too strong. It’s a delicate dance of text messages, talks over coffee, and if you’re lucky, a shared playgroup. But if it’s so much trouble, why bother? You’ve heard the saying misery loves company, right? So do the sleep-deprived and hormonal.

War buddies
When you become a mom, your world turns upside down. Sleep is elusive, your body is hardly recognizable, and your social life has undergone a serious shift. On top of that, you’re suddenly in charge of a human being who is 100 percent dependent on you for survival. It’s kind of a lot to take in.

Those first few weeks can feel like there’s a war being fought. My husband and I were a strong team during his week of paternity leave—sleeping in shifts and strategizing every plan of attack, but he escaped to the office after that week, and I felt like I was deserted on the battlefield.

That is, until I met my mama friends— my comrades, if you will. Kris Fedenia, RN, IBCLC, co-facilitator of the Mother Baby Hour program at Meriter Hospital in Madison, Wisconsin, describes mom friends as the ones who are in the trenches with you, going through the same challenges, the same battle. And I couldn’t agree with her more.

It’s not you, it’s us
Whether you’ll be staying at home full-time or are temporarily on maternity leave, the isolation of being home alone with baby can be, well, isolating. Lori Hughes, RN, founder of the Mother Baby Hour program, stresses the importance of getting out of seclusion in order to accept your new normal. “When you’re in a room with other moms, you learn that their babies aren’t sleeping through the night either. Everyone is exhausted, and every baby is fussy between 4:30 p.m. and 7 p.m.” When you’re not around other moms, you’re likely to think breastfeeding struggles or colic issues are limited to just you or just your baby. Rest assured, that’s not the case.

Where the moms are
After my husband returned to work, I packed my baby up and headed out to find my people. How would I recognize them? They’d be the ones with dark circles under their eyes, disheveled hair, leaking breasts and mismatched clothes. I made my way to my local hospital’s new mom discussion group.

Many hospitals and birth centers offer gatherings for new mamas, so when you’re on your tour, ask your guide for details. At Meriter Hospital, where Fedenia and Hughes work, the Mother Baby Hour is free to all new mothers, regardless of where they delivered. (The program is modeled after a similar one in Seattle.) Other places that offer new moms groups include local baby stores, churches and even libraries. Talk to seasoned mothers you know, and find out where they met their friends.

Don’t let your preconceived notions about “mommy groups” keep you cooped up. Imogen Hurly, mother of one in Madison, Wisconsin, suggests that even if you don’t completely agree with the group’s principles, it’s worth taking advantage of the opportunity to connect with other women. For example, most La Leche League chapters offer support groups—but they don’t limit membership to women who are breastfeeding.

In fact, you might be surprised to find you’re not the only one in the room who feels out of sync. When I attended my first Mother Baby Hour, most of the women were struggling with making too much milk. I, however, had just been told that my body would never produce enough. Although we were in tears over opposite problems, we were, at least, all in tears.

After 14 years moderating Mother Baby Hour, Hughes has learned a thing or two about forging new mom friendships. Her recommendation: Show up a little early for group gatherings, and plan to stay a little late afterward. During the meeting, discussion is often guided by a topic, but before and after, you can have more casual conversations.

Can’t find a group? Just get out the door. Lindsay Pinchuk, CEO and founder Bump Club and Beyond, a social event company for new and expectant moms, and mother of two in Chicago, encourages new mamas to leave the house and spend a morning or afternoon in a coffee shop. When you’re there, don’t be shy. If you see another woman pushing a stroller, strike up a conversation. She likely needs a friend just as much as you do.

Picking up chicks
So you spotted your potential mama friend and have maybe even made eye contact and shared a shy smile. What’s next? Start out with a simple, “How old is your baby?” or “I love your [fill-in-the-blank-baby-item],” Then go from there.

As a heads up, breastfeeding, diapering and sleep arrangements are the religion and politics of early parenthood—it’s generally best to avoid discussing them early on in a relationship. If you do decide to broach the often controversial topics, be aware that your way is not the only way. Hughes and Fedenia both attest to having witnessed mamas alienate themselves by being too narrow-minded and too out-spoken. Remember: There is never a right or wrong way when it comes to parenting. We’re all doing the best we can.

Once you’ve made a connection, April Ueland, mother of two in Albuquerque, New Mexico, urges you to be persistent. Ask for a number, and once you exchange, be the one who follows up. “We are all busy and jug- gling many things. Don’t wait for the person to call you, or you may be waiting forever,” she says. With a baby, there is no time to be coy. When I met a potential mama friend at an outing, I tracked her down through a mutual friend and invited her to join our playgroup. It was borderline stalkerish, but it paid off. We’re now quite close.

After the first date
Once you’ve found your village, how do you keep it? Start with some standing playdates. If your hospital group met on a Tuesday and recently ended, get the same group together at the same time to keep the relationships going. Weekly playgroups provide structure. Plus, if you miss one meeting, you have another chance to see them again soon.

If you’re a working mom, consider a monthly weekend playdate, which is what Hurley did when her maternity leave ran out. She wanted to stay in touch with moms she met but found it was unrealistic to schedule anything during the week. “When I had a young baby, I didn’t realize that bedtime would be at a regular time—and that that time would be right after dinner,” she recalls.

While it’s important to get some dates on the calendar, be cautious of overcommitting. Tarah Chieffi, mother of one in New Albany, Indiana, warns moms to keep some flexibility in their schedules, so they can fit in some one-on-one time with new friends. She has one acquaintance who is so busy with different groups that it takes a month to schedule a playdate.

Plan some just-for-mom playdates as well, Caroline Laviolette, mom of two in Chicago, recommends. Have your partner watch the baby, so you can really get to know your friends without the distraction of your little ones. The time away will help keep your sanity in check, too.

Being a new mom is an intense period of your life, which makes it a rare time where you can really bond with another adult, and the friendships you make when your baby is in diapers can last a lifetime. Take advantage!