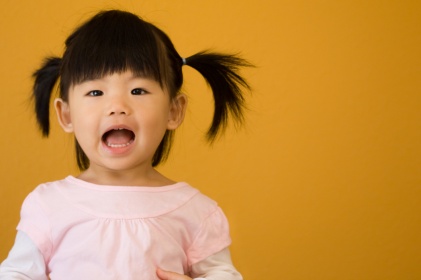 Your toddler will gradually understand how she can use words to describe what she sees, hears, feels and thinks. Even before she uttered her first word, she was listening to and learning from everyone around her.

How did my baby’s speech develop in her first year?
From the moment your baby arrived in the world, she was learning how to communicate. Her first form of communication was crying. She cried when she was hungry, uncomfortable or tired.

From around three months, your baby may have started to babble to herself and make sounds back when you talked to her. She may have begun to recognise her name, and even responded when you said it from across the room.

From around six months, you may have noticed your baby favouring certain sounds, such as “ba” or “ma”, as these were easier to pronounce. She may have repeated them over and over because she liked the way they sounded.

How will my toddler learn to talk?

12 to 17 months
From around her first birthday, your toddler may begin to use one or more words and know what they mean. Her first words could well be a variation of “mummum” or “dada”.

By around 15 months, your toddler will probably raise her voice at the end of a question. She may make hand gestures to emphasise what she’s saying, such as pointing and waving.

Your toddler may be able to understand and follow simple or routine instructions, such as “Pick up your teddy” or “Come to the table”.

She may be able to put two words together, making basic sentences such as “Carry me”. When you sing a nursery rhyme, she’ll attempt to sing along with you. So if you sing “twinkle twinkle little…” and pause, your toddler may add in “star.”

She will chatter to herself as she plays. Enjoy listening to your toddler as she creates her own little world. It doesn’t matter if what she says doesn’t make sense. The rhythm will sound like real speech.

Pronouns such as ‘I’,’she’, and ‘it’ may confuse your toddler. These labels for things and people are a little too abstract for her just yet. You may catch her avoiding pronouns, saying “Baby throw” instead of “I throw”. There’s no need to worry if your toddler’s speech doesn’t sound clear yet. Every toddler learns different sounds at different stages.

25 to 36 months
Your excitable toddler may struggle not to shout when she’s expressing herself. She doesn’t yet understand how she can change her voice to find the right volume when talking.

Your toddler will start to get the hang of pronouns, such as ‘I’, ‘me’, and ‘you’. She will also be using the word “no” a lot. This is her way of asserting her independence from you!

Between the ages of two and three, your toddler’s vocabulary will increase to about 300 words. She will string naming words and action words together to form complete, though simple, sentences such as “I go now”.

Your toddler may ask you simple questions, such as “What?”, “Where?” and “Who?” a lot. Get ready to be patient as your curious toddler wants to know the answer to everything!

By the time she turns three, your toddler will be able to have a simple conversation with you about what’s she doing now or something she’s done in the recent past.

But don’t be surprised if your toddler gets the tense wrong when she’s telling you about something that’s happened. For example, she may tell you that she “swimmed”, when she means that she “swam” . Try not to tell your toddler that she got the word wrong. Instead, answer her with the correct tense. So tell her, “yes, we swam yesterday.”

By now your toddler may be able to tell you her full name and gender, and perhaps even her age.

How can I encourage my toddler to talk?

Talk to your toddler as much as possible as you go about your daily routine and when you are out and about. The more you talk to your toddler, the more new words she’ll learn, and the better she’ll get at talking.

Chat to your toddler as you change her nappy, feed, or bathe her, and give her time to respond with a smile or eye-to-eye contact. Use everyday activities to help your toddler to make connections between actions and objects and the words that represent them. Point out things you see when you’re out and about.

Simplify your speech when you talk to your toddler. Use short sentences and emphasise key words. This will help your toddler to focus on the important information.

Try talking to your toddler from time to time in sentences that are about one word longer than the sentences she is using. So if your child uses two-word sentences, use lots of three-word and four-word sentences when talking back to her. For example, if your toddler says “a fish”, you could say, “yes, a big fish.”

You can increase your child’s vocabulary by giving her choices, such as “Do you want an orange or an apple?”. You could even show your child both an apple and an orange. This helps your toddler to store a picture of the word in her mind.

Look at books with your toddler regularly. Even if you don’t follow the story as it unfolds, your toddler will learn by listening to you talk about the pictures.

If you’re worried, have a chat to your health visitor. She will most likely be able to reassure you that your child’s speech is developing normally, or refer you to a speech and language therapist for assessment.