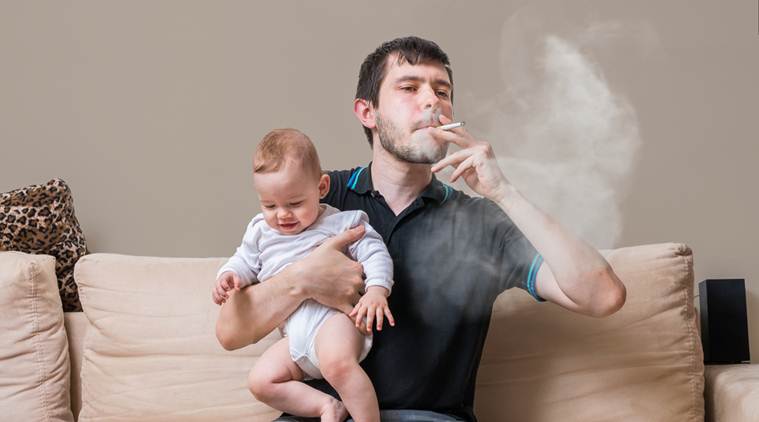 A father’s nicotine use may have a significant impact on children’s risk of some diseases. In a study published in the online biomedical sciences journal eLife, Oliver J. Rando, MD, PhD, and colleagues at UMass Medical School, demonstrate that mice born of fathers who are habitually exposed to nicotine inherit enhanced chemical tolerance and drug clearance abilities. These findings offer a powerful framework for exploring how information about a father’s environmental exposure history is passed down to offspring.

“Children born of fathers who have been exposed to nicotine are programmed to be not only more resistant to nicotine toxicity, but to other chemicals as well,” said Dr. Rando, professor of biochemistry & molecular pharmacology. “If a similar phenomenon occurs in humans, this raises many important questions. For example, if your father smoked does that mean chemotherapy might be less effective for you? Are you more or less likely to smoke? It’s important to understand what information is specifically being passed down from father to offspring and how that impacts us.”

Studies over the past decade in the field of epigenetics — the study of inheritable traits that are carried outside the genome — have provided unexpected support to the notion that the environmental conditions experienced by a parent can affect disease risk and other features of future generations. In mammals, many of these studies have focused on interactions between the male parent and the offspring — paternal effects — as these are in many ways easier to investigate than maternal effects. Specifically, a number of studies have linked paternal diet to metabolic changes in offspring, while others link paternal stress to anxiety-like behaviors in the next generation. Despite the growing number of these studies, only a small number of paternal exposures have been explored rigorously in the lab. In addition, it has remained unclear in these studies whether the offspring response is specific for the paternal exposure, or whether it is a more generic response to a father’s overall quality of life.

To address this question, Rando and colleagues set out to determine how precise the response is for the environment experienced by the male parent, by looking at a single molecular interaction. Nicotine is a commonly used drug in humans, and acts by binding to a specific molecular receptor. Providing male mice with access to nicotine, researchers sought to learn whether their offspring were more or less sensitive to nicotine, and whether the offspring response was specific to nicotine or extended to other molecules.

What researchers found is that the offspring of nicotine-exposed fathers, compared to the offspring of fathers that were never exposed to nicotine, were protected from toxic levels of nicotine. Researchers then tested whether this resistance was specific for nicotine by treating both sets of offspring with cocaine, which acts via a wholly distinct molecular pathway than nicotine. Surprisingly, the children of nicotine-exposed fathers were also protected from cocaine. This multi-toxin resistance is likely a result of enhanced drug metabolism in the liver, and corresponds to an increase in expression levels of genes involved in drug metabolism. These genes were also packaged in a more open and accessible configuration in the liver cells, allowing for increased expression.

“This demonstrates that ‘dad’ paints with very broad brush strokes. Fathers exposed to nicotine do not specifically program changes in nicotine receptors in their children, as these children are broadly resistant to multiple toxins,” said Rando.

To determine if multiple, distinct molecules are capable of affecting drug resistance in the next generation, Rando and colleagues treated male mice with another bioactive compound, mecamylamine, which blocks nicotine receptors and is sometimes used to help people stop smoking. Surprisingly, offspring of these mice exhibited the same chemical resistance as those exposed to nicotine.

“These findings raise key questions about what drugs or molecules are sufficient to affect children of exposed fathers,” said Rando. “What distinguishes nicotine and mecamylamine from the countless small molecules present in our food and environment?”

The next step for Rando and colleagues is to determine how many channels of information are being passed down from parent to offspring. “We now know that this information is relatively nonspecific,” he said. “But is dad only telling us, on a scale of 1 to 10, that his life was good or not, or is he telling us four or five things broadly about the amount of food, level of stress and degree of chemical exposure?”

Given the prevalence of smoking in humans, Rando notes that “there are obvious reasons to be interested in whether this type of effect also happens in human beings, but given the differences between mice and humans in their metabolism of nicotine, it will need to be tested rigorously in future studies of human populations.”