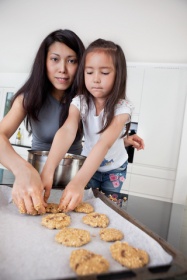 As first-time parents, we want to make sure we do it right. We set rules and schedules, firmly abiding by them. With no other sibling to look to as role models, the first child looks up to his parents for examples. First-born children often walk and talk earlier than other birth orders. They have the desire to follow in their parents footsteps and grow up being little adults.
There is nothing wrong in setting strict rules and routines for a child to follow. After all we just want the best for them. However, over-parenting and over-protecting your first-born can have adverse effects and strengthen the perfectionism in them. They grow up having high expectations of themselves, get frustrated when things do not go perfectly, and can eventually lose confidence in themselves.

Here are the top 5 mistakes any first-time parent wants to avoid to raise a happy, confident child.

1. Being an Improver
When you set a task for your young child to do, for example, to make the bed, do not improve the task after the child has completed it. Avoid straightening out the wrinkles or smoothing that bump caused by a lost toy underneath the covers.
By doing so you are sending the signal to the child who thinks that, “I am not good enough.” Learn to be flexible. Encourage and praise him when he has completed the task well enough. Be satisfied with a less-than-perfect job.
Let it go, shut the door, and no one else has to see the bed. It’ll get messy again soon anyway.

2. “Shoulding”
“You should do this, you should do that.”
When you use “should” you are telling your child that what he is doing just can’t measure up to your expectations. This not only deals a blow to his self-esteem, but also reinforces his ingrained perfectionism.
A first born child is already internally telling himself what he “should” do, and by doing it to him he not only resents the “shoulding,” he also becomes harder on himself privately. This can cause him to be tougher to discipline later on.
If you need to discipline your first born child, always end with an affection, such as a hug or kiss.

3. Quick Correction
A first born child is very sensitive to criticism due to his ingrained strive for perfection and need to match up the adults’ expectations.
If your child has difficulty reading a word, give him some time to try to sound it out. Your good intentions may be misinterpreted as a form of criticism that he was unable to read the word correctly. Offer help only when he asks for it.

4. Hiding your mistakes
The first born looks up to his parents as role models. If you are a perfectionist yourself, he will see that in you and expect himself to be the same – flawless. When things do not turn out the way he wants them to, he may get frustrated and go ballistic.
The best thing you can do for him as a parent is to admit your mistakes. Show him that you as an adult make mistakes too. Apologize if you done something wrong, such as a spill, or if you accidentally bumped into him. Ask your child to forgive you, and most importantly, forgive yourself and let it go.
Another way to show that you too are human and not as flawless, is to ask for help. Ask for help in deciding what to have for dinner (but provide the choices), or ask him to do a simple task such as wiping the table. Remember not to improve on the task if he missed a spot!

5. Over-Relating
If you are a middle child and have gone through life feeling stuck in the middle, you will tend to sympathize with the feelings of your middle child. If you are a first born yourself, you are also going to sympathize with the perfectionistic strive your first born child will have. The problem occurs when you overlook the matter itself and reason a misbehavior with “I felt this way when I was his age.”
Learn to differentiate between the matter itself and from personal experiences. This is especially important if you have to discipline more than 1 child for the same behavior. It would not make sense to send the first born to the room, and spare his younger sibling punishment, just because you knew it started off with the first born. Know what the reality is, and deal with it justly.