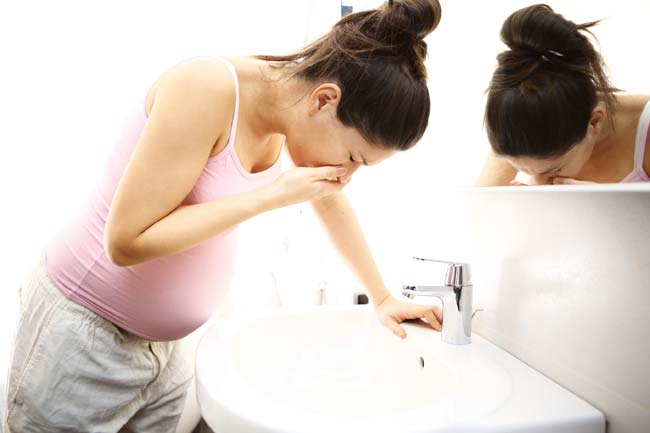 It’s your pregnancy phase and your mornings are no longer good mornings, rather they are bad mornings. Even in the daytime whenever you wake up from a nap after dreaming about your little bundle of joy, you find that you are down with nausea during pregnancy, an uneasy feeling of discomfort. Don’t worry, relax. Here are some tips to minimize this temporary rough patch which sometimes tries to overshadow the beautiful experience of motherhood during pregnancy.

Pregnancy cannot be separated from morning sickness or nausea or vomiting during pregnancy, or pregnancy sickness. If any mom-to-be is feeling well and rosy during the entire pregnancy period, she should consider herself lucky but in most cases (between 50 and 95 percent of all pregnant women) morning sickness is termed the bitter part of pregnancy. It is, at the same time, a natural phenomenon during pregnancy so there isn’t much to worry about. Morning sickness can occur at any time of the day, though it occurs most often upon waking.

The exact reason of nausea during pregnancy is not known yet. According to experts, it is most probably due to raised hormonal level i.e. human chorionic gonadotrophin (HCG) during pregnancy. There could be other reasons too, such as :-

An increase in progesterone relaxes the muscles in the uterus, but may also relax the stomach and intestines, leading to excess stomach acids during pregnancy .

An increase in sensitivity to odors during pregnancy, which over stimulates normal nausea triggers.

Few time tested remedies to deal with morning sickness during pregnancy, and which are also endorsed by grannies, are offered.

Avoid an empty stomach in the pregnancy period. Take toast preferably made of coarse grain with milk or tea on an empty stomach; or a glass of water with biscuit before you rise from bed. Through the day, drink plenty of fruit juice, buttermilk or skimmed milk.

Don’t cut out on meals or food- instead eat less but at short intervals. Else throwing up can leave you dehydrated, harming the baby too.

Avoid greasy or fried food during pregnancy, as these take longer to digest.

Don’t lie down right after you eat during pregnancy, it will make you uncomfortable.

In pregnancy period don’t indulge in over work. Take all the rest you can. There is nothing like a good sleep. A nap too will make you feel better.

Ginger, in capsules, tea or in any form helps a lot in pregnancy sickness.

Vitamin B6 and zinc are known to reduce nausea, but take them under expert medical guidance. Alternatively take a banana, raisin or hazelnut. They are wonderful remedies for reducing nausea during pregnancy.

Lemons, particularly the smell of freshly cut lemons, might refresh you during pregnancy.

Drink liquids 30 to 45 minutes after eating solid food as this aids in digestion during pregnancy.

More often than not, the desire to vomit is quelled by these simple measures. If not, the doctor can counter nausea with certain medicines. Also request your doctor to prescribe medicines for acidity, pain, and discomfort during pregnancy.

Do adequate light exercise. Start slowly and work yourself up to a tempo. Exercise reduces unwanted fat, particularly in the last trimester of pregnancy. Studies shows nausea can be reduced by regular mild exercises such as walking. Walking therapy will definitely make you feel good especially if you are residing by some green patch. Be one with nature and enjoy cool relaxed walking.
Pregnancy is a time to enjoy and not to be stressed out. Make your pregnancy a beautiful and celestial experience. God has been very kind to women because he has bestowed the right of creating living humans to women alone, and you create a beautiful new life out of your own blood and flesh. Start relaxation, meditation or any other spiritual practice that will calm and center you and help you rid yourself of any anxiety or stress. Put on either some spiritual music, calm instrumental music, chants or other music that makes you feel relaxed and at peace.