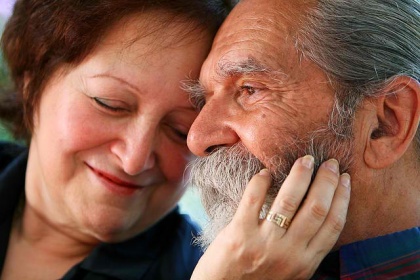 While I was waiting for my name to be called for the job interview this morning, I saw this 60-ish woman who was speaking to someone over the phone. I could overhear what she was saying to the person on the other line. She was almost crying- you know that type that shows joy instead of sadness? She laughed most of the times, or was it giggle? I often heard her saying,”Sweetheart,” thus I am certain that she was speaking with her partner. She ended the call with, “Thank you Sweetheart, I love you. See you later!”

And yes, I was dumfounded. She caught me looking at her. Ashamed, I bowed down, but she greeted me instead. I smiled at her, and she at me. The usual meeting and greeting, exchanging names and numbers-yes, even our numbers. She was actually there to visit her niece who’s gonna be my interviewer. While we were both waiting for her busy niece, we talked about anything under the sun. Two hours seemed so short for a wonderful talk.

She was a plain housewife who has a businessman-husband. They have 4 kids, the eldest is 32 and the youngest is 26. She told me that it is their 35th anniversary next Friday. And she and her husband are both planning to celebrate it bigger this year. She said that it was her husband who was insisting on throwing a big party. And you know, if you could see how her eyes glimmer while she’s telling those things! Hay…I didn’t know what else to react but to smile and be awed. I guess the usual me kicked in: hopeless romantic.

I asked ‘am Elena-that’s her name- what her secret to staying married for over 30 years was (of course, only after she volunteered the information to me in the course of our conversation). She corrected me and said she did not just stay married, she stayed in love while married. And that the secret was in loving her spouse, every single day of her life, in little things as well as in the bigger ones. Soon enough, she said, it became a habit – one that just flowed out effortlessly, as natural as breathing.

I remember me again, steeping well. I am capable of that. Feeling in-love like it is for the first time.

I thanked her for decoding her marriage’s secret. We all know that, but very few can actually live by that. Most of us aren’t prepared for the fact that life can really get in the way of loving souls. But they are. And they persist.

Loving is best done in the milieu of everyday life. When there is love, everything you do with, for and apart from your beloved is always infused with the love held precious in the heart. Only then will these little chores, the compulsory routines, essentially become more than what they are. Simple things. A smile from him or the fact that he makes you smile effortlessly. Man, what could be more beautiful?

Yes, we appreciate the grand gestures that showcase how much we are valued but somehow we always tend to soak longer in the memory of the more mundane ones. Those ordinary moments are the perfect prerequisites for extraordinary memories, those modest gestures make for more lasting impressions. They are the ones that beautifully stand out, they are those we remember more.

My heart will soar in the knowledge that there was never a time when my loved one did not engulf me in a big bear hug, a treat I always look forward to. I will always hold precious the countless times we would hold each other’s hand, through good and bad times, while going downstairs , while smoking, through tears and traffic jams. I will read over and over again, till they are all old with age, the random emails and poems he leaves me, remember sweetly, too, the many times he made me laugh and he challenged me intellectually. He has his own special brand of magic.

And here’s a gospel truth: not only in the context of marriage but in the realm of all kinds of human relationships as well, always, it is the little everyday things that count for more.

And this is the best thing that happened to me today. Ma’am Elena Paraiso and Sir (is it) Robert or Roberto Paraiso? Anyway, to you both, “Happy 35th anniversary.” Thank you for inspiring people like me who have always believed in true love. I want to wish that you get yourselves another kid, but nature takes its toll, so instead I’d wish that you go get a grand vacation that you deserve.

And thank you…for the invitation. Like you, I had fun in waiting, too.