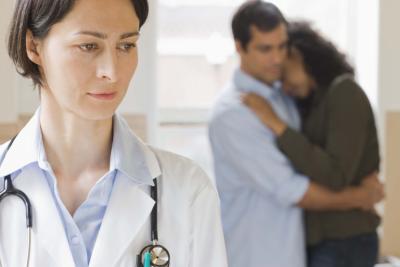 Not, that is, until you’re sure the other person has also suffered a miscarriage. Then you are free to share your experience and offer and receive sympathy with your fellow victims. But before then, keep your mouth shut. Don’t talk about the baby you just lost, the pain — both emotional and physical — you’re coping with. Look at most of the people you know and love in the face and pretend you were never even pregnant, that the baby you conceived in love and wanted more than you could have ever even imagined didn’t exist, especially if you were still in your first trimester. Never tell anybody you’re pregnant until you’re out of your first trimester, just in case something like this happens. The first trimester is so “fraught” — that’s medical advice an OB gave me.

I recently suffered a miscarriage. In medical terms, it was a blighted ovum — meaning something happened early on and my baby stopped growing. Although I was ten weeks when I finally had to admit my pregnancy was over and I went for the D&C, there was nothing in my egg sac. No inch-and-a-half-long fetus with a heartbeat and arm buds like there should have been. It was clear to me from the first shot on the ultrasound that something was horribly wrong, although it took two doctors to confirm the situation. The first doctor told me that my baby was jumping around too much to see, something I thought was kind of odd to say, since my baby didn’t have legs. Apparently, doctors don’t have language to talk about miscarriage, either.

While I got some fantastic advice from some great people, I was shocked at the bizarre and sometimes hurtful things people said to me. But I can’t really blame them. When you don’t talk about something, you don’t know how to talk about it, either. And I think that needs to change. I was lucky enough that I have some amazingly open and supportive women in my life that helped me get through my miscarriage, but I know there are women out there who aren’t talking, who are going through this alone and that breaks my heart.

So here’s my advice to you, a cheat-sheet if you will, about what not to say if you find you’re at a loss for words faced with a loved one’s loss of pregnancy.

1. “There will be other children.”I understand this is an attempt to be reassuring, but it makes it seem like the child you lost doesn’t matter. I hated hearing this. I wanted to mourn the loss of this child that I loved and, for weeks, planned for and dreamed about. There most likely will be other children, but they will never be a child who was supposed to be born in August, a child who was going to be able to smile at my son’s third birthday, who was going to be 4 months old at Christmas this year. I will never get to meet this child who made their presence known a week after conception and left us shortly thereafter.

2. “You shouldn’t talk to ____ about your miscarriage when she’s so early in her own pregnancy.” This was, by far, the most ridiculous comment I heard, so much so it was almost laughable. There is, in most situations, nothing you can do to prevent a miscarriage. And it’s certainly not catching. Hearing about another woman’s miscarriage is not going to suddenly induce your own. And talking about your own lost pregnancy is not going to cause another woman to lose hers. In fact, sharing your experience opens up a space for the other woman to talk about her fears and, should something happen in her own pregnancy; know that she’s not alone and that she has a shoulder to lean on.

3. “Be happy for other people who are pregnant.” I had the (I’m guessing) rather unique experience of having not one, not two, but three people close to me with due dates within days of when I had been due. And when I said to a close family member that it was really hard for me to be constantly reminded of where my pregnancy would be, she said, “Just be happy for them.” It felt very dismissive of my pain. I was incredibly happy for my friends and actually found a lot of solace in the fact that I was still just months away from new baby smell and tiny fingers and toes. But it was still hard to watch people and know, “That’s where I would have been.” We have to allow room for people’s pain in these situations.

4. “So-and-so’s miscarriage was worse than yours.” This was said to a friend of mine who, oddly enough, was going through a miscarriage at the same time I was. Miscarriage sucks. End of story. Statements like this say you aren’t entitled to your grief. Even if you’re finding out you were pregnant as you’re miscarrying, it’s a traumatic event and you need to feel free to grieve as you see fit, not worry about how your experience stacks up against the experiences of others.

5. “It’s not your fault.” I recognize the necessity of this statement, but it kind of proves my point. There are a lot of women losing babies out there. Some articles I read put the percentage as high as 50 percent of all clinical pregnancies, although most seemed to think that number was closer to 25 percent. That’s one in four! And we’re not talking about it. That means women you know are suffering alone and in silence. We have to open a dialogue, make miscarriage something that we acknowledge instead of hide. And the way to do that is to start opening up about our own experiences and letting others talk about theirs, until “It’s not your fault” is something nobody feels like they have to say.

The original version of this article is written by Lindsay San Giacomo for Huff Post Parents.