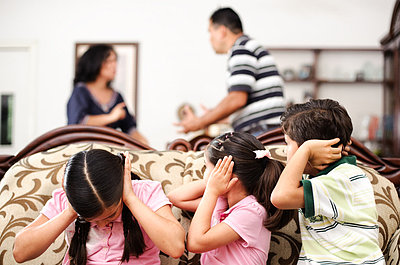 Arguments between Mom and Dad can alter the stress responses of children, new research finds, possibly resulting in kids who lag behind their peers in problem solving.


The study, released on March 18, 2013, in the journal Child Development, followed second- and third-graders for three years, asking them about their parents’ fights and measuring changes in the kids’ ability to deal with stress over time.


“In turn,” Hinnant added, “we want to understand how development of these stress-response systems is related to children’s cognitive performance.”


To do so, Hinnant and his colleagues turned to a measurement called respiratory sinus arrhythmia (RSA). RSA is the pattern that keeps the breath and the heart rate in sync with one another; it’s controlled by the parasympathetic nervous system, the part of the nervous system that’s in the driver’s seat while people are at rest.


At rest, RSA should be high, indicating that the parasympathetic nervous system is in charge. A high RSA is linked to a lower resting heart rate.


During a moment of stress, however, the calming parasympathetic nervous system becomes less dominant, and the sympathetic nervous system kicks in, triggering the fight-or-flight response. Pupils dilate, the sweat glands kick into action, the blood vessels constrict and the heart speeds up. These responses can be useful in the short term — active blood flow and primed sweat glands are beneficial for, say, running from a lion — but over time, repeated activation of this system and suppression of the parasympathetic system can be rough on the body.


“When parasympathetic nervous system activity declines for whatever reason, it can seem to result in a lot of negative health and behavioral and psychological outcomes for people,” Hinnant said.


Hinnant and his colleagues, funded by a National Institutes of Health grant awarded to Mona El-Sheikh of Auburn University, recruited 251 healthy second- and third-graders living in two-parent homes (88 percent of parents were married, and the rest cohabiting). At ages 8, 9 and 10, the kids came into the psychology lab to complete a test of cognitive abilities, including a task in which they had to trace a star using a mirror. During this star-tracing task, researchers used electrocardiograph (ECG) electrodes to measure the children’s heart rates, and a strap around their chests to measure how quickly they inhaled and exhaled.


The kids also reported how much their parents fought.


The heart rate and breathing measurements enabled the researchers to calculate RSA, and thus peek into the action of the parasympathetic nervous system. They found that kids who lived in high-conflict homes at age 8 had reduced RSA reactivity to the stressful star-tracing task at age 9 — but only if their RSA was low to begin with.


What these findings mean, Hinnant said, is that the kids with naturally low RSA seem vulnerable to stress-system burnout when exposed to a chronic stressor like fighting parents. A healthy kid would show a big change in RSA in response to the stressful task, indicating that their stress systems were gearing up for a challenge. These low-RSA, biologically vulnerable children, on the other hand, seemed burned out by the stress in their daily lives and didn’t respond appropriately when a moment of acute stress came along.


“Working out some is good for our body,” he said. “It strengthens your muscles. But if you were made to run on a treadmill for 24 hours, eventually your muscles would tear apart.”


The apparent stress burnout seemed to have real-world consequences. The burnt-out kids developed most slowly in an area called fluid cognitive ability, essentially a measure of their aptitude at solving new problems.


“Eventually they started lagging behind all the other children in terms of their fluid problem-solving skills,” Hinnant said.


The findings help explain how biology and the environment interact to create kids with easily observable problems, he said. Hinnant’s colleagues at Auburn University are now working on studies of kids in adolescence, an important time when many troubled teens fall into substance abuse and delinquency, he said.


“Stress can get under your skin and have influences on how your body functions, which then translates to, potentially, problems in other areas of your life as well,” Hinnant said.

This article is written by Stephanie Pappas for LiveScience last March 29,2013.