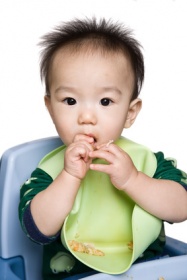 After subsisting on fluids alone for her first few months of life, there will come a point when baby is ready to expand her intake and broaden her palate. The mealtime milestone can offer endless entertainment as baby reacts to new tastes and textures (keep that camera at the ready!), but before you plan your mini’s menu, there are a few things early eaters’ chefs should know.

A solid start
Although breast milk and formula provide adequate (and excellent!) nutrition for baby’s first months of life, eventually your little one will require additional sources of protein, zinc, iron and B vitamins, explains Stan Cohen, MD, adjunct clinical professor of pediatrics at Emory University School of Medicine in Atlanta and author of What to Feed Your Baby: Cost-Conscious Nutrition for Your Infant.

How will you know when baby is ready to move beyond the bottle? The American Academy of Pediatrics (AAP) recommends that infants begin consuming solid foods when they’re between 4 and 6 months old (preferably the latter). By this age, your tiny diner should have doubled her birth weight (and weigh at least 13 pounds). She’ll have good head control, which will allow her to lean in to accept food or turn away from the spoon when she’s no longer hungry. And she’ll have begun losing the tongue-thrust reflex (also known as the extrusion reflex), an innate behavior that helps prevent choking while breast- and bottle-feeding but gets in the way when it comes to swallowing solids.

Beyond physical readiness, baby will likely also express personal interest. She may reach for your food while sitting on your lap at the table or watch you intently as you eat. Further, she may show signs of hunger that can’t seem to be quenched by breast or bottle. “You can see [this] when babies still are hungry though they’ve been breastfed 8 to 10 times or have taken more than 32 ounces of milk in a day,” explains Cohen.

Fare play
Because its consistency is easily adapted to meet the proficiency of the eater, iron-fortified cereal makes an excellent first food. Cohen adds that it can be mixed with breast milk, formula, water or diluted juice (vitamin C facilitates iron absorption) depending on baby’s needs.

After one to two weeks with rice cereal, parents can add more foods to baby’s diet. There are typically two patterns parents follow when introducing produce and proteins. The first is to introduce cereal, then add four vegetables (yellow or orange then greens), then four fruits, then meats (and fish) at the end. “This provides a variety of flavors and textures that can then be interchanged,” Cohen explains.

The other method, which Cohen notes is equally acceptable, entails introducing one food from each food group (i.e., one vegetable, then one fruit, then one meat) and then rotating through again, offering another new food from each group. After one to two months of offering thin purees, most babies are ready to move on to thicker purees with a bit more texture.

À carte
Regardless of order, foods should be introduced one at a time, so parents can observe any reactions (and potential allergies) their child might have. “I generally recommend that your baby be introduced to only one new food every three to five days in the beginning,” says Cohen. “If your baby is to be started on carrots, she will start with a small amount the first time they’re given, build up to full volume by the second or third day and continue on the carrots for another day or two.” During that time, no other new foods should be introduced.

If no reaction is apparent after three to five days, it’s generally safe to assume your wee one doesn’t have an allergy, and you can go on to introduce another food. If a reaction (most often a facial rash or vomit-ing but sometimes diarrhea or bloody stools) does occur, you’ll want to determine the cause—which may or may not be the food. Cohen recommends that parents stop offering the food (in this case, carrots) for the time being and reintroduce it several weeks later.

“Generally, if the same reaction occurs on three widely spaced trials—whether it’s a rash on the face or vomit- ing—and it follows the introduction of the food within a period of 24 to 36 hours, you can assume that an allergy is present, and you should avoid that food for at least several months,” Cohen says.

As always, keep your pediatrician looped in on any reactions your thought may have. She can help you determine whether they’re truly a response to a new food and, if so, advise how you should proceed.

Portion control
Baby may be young, but it’s not too soon for overfeeding to be a concern. Overfeed-ing can worsen reflux and even begin the journey toward being overweight, explains Cohen. Monitoring baby’s urine frequency and bowel movements and reviewing her growth progress can help ensure she’s on a healthy track. (Useful instruction on how to do this is available at What2FeedYour Baby.com.) You can also pay attention to your munchkin’s cues. When baby loses interest—she may begin turning away as the spoon heads toward her mouth, playing with her food or looking around for other distractions to entertain her—it likely means she’s full. Take note of these behaviors, and let baby dictate when mealtime is over.